Skip to Content
Home ABOUT Entertainment POP CULTURE Daddy Issues: What My TV Fathers Taught Me

I don’t know about you, but I spent most of my childhood (the 90’s) in front of a television set. In fact, I actually once told Simpsons-creator Matt Groening that Homer Simpson raised me (he looked at me with a little bit of concern, as if his eyes were saying, “D’oh!” Not exactly the ideal TV dad to be raised by.)

Anyway. Since many television dads have contributed almost as much to my personal growth as my real-life father, I decided a blog post tribute was in order. So without further adieux (do people type that phrase? I’ve only heard it said. Anyway…), I bring to you “The Lessons I Learned from my TV Fathers.”

“You tried your best and failed miserably. The lesson is to never try.” 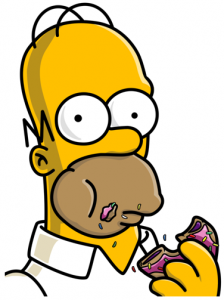 Oh, Homer. I have so many fond memories with you over the last 20+ years. Whether it was your lesson in how cruel kids can be (the “No Homers” club, anyone?) or how to take advantage of the government (you can get disability benefits just by being 300 lbs?! Donuts? Don’t mind if I do), you’ve been a very unique role model. I credit you for both my laziness and my love for food.  I have a sweet spot for donuts because of you. And if Krusty Burger existed in real life, you can guarantee that it’d be fulfilling my late-night cheeseburger cravings instead of In-N-Out. So thank you, for that. Here are some more lessons I’ll take with me for the rest of my life:

“Lisa, if you don’t like your job, you don’t strike. You just go in every day and do it really half-assed. That’s the American way.”

“Getting out of jury duty is easy. The trick is to say you’re prejudiced against all races.”

“Kids are the best, Apu. You can teach them to hate the things you hate. And they practically raise themselves, what with the Internet and all.”

Danny: Am I the raddest, baddest dad a kid ever had?

DJ: Right up until you said that. 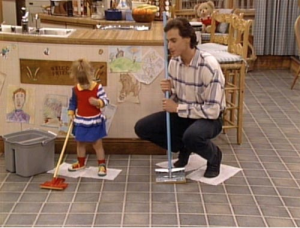 Danny Tanner – the first TV dad I can really remember.  My earliest memory of television actually involves this show.  For some reason, I used to call this “The Baby Show” (perhaps because Michelle was a baby? I dunno. I was stupid at age 3.) Anyway. Danny T taught me that cleanliness leads to… being really effing annoying (thought I was gonna say ‘Godliness’, didn’t ya? No no, my mother taught me that one.) I also just assumed that all of life’s troubles, issues, and confrontations should end with a hug and a giant audience reaction of “awwww.”

All joking aside, Danny taught me that it was okay to not be cool or hip. In fact, he taught me that puns and being cheesy were actually okay (here’s an example:  “Get down! And I don’t mean get funky.”)

He taught me that you could have a career as a television host.

And he taught me…how to make a sandwich.

Danny: First, we start with a clean knife. And on the left slice, mayonnaise. Yum! And on the right slice, mustard.

Joey: Bet you’re going to get another knife.

“Edward Arthur Winslow, son I’m ashamed of you. Dont you know when you make a mistake, you fess up to it. Trying to cover it up would only make it worse.”

Tough dad. It’s kinda hard to get away with anything when your dad’s a cop. So naturally, Carl Winslow’s contribution to my life? Discipline. Ironically, that word has multiple meanings, and while he may have taught discipline in the “if you get in trouble you’ll pay the price” sense, he definitely did just the opposite when it came to willpower, especially diets.

Harriette (wife): You eat all that ice cream and you can kiss your diet goodbye.

In fact, he encouraged me to prioritize food.

[family looking through a vacation pamphlet]

Eddie: Look at those beaches.

Laura: Look a those sunsets.

Rachel: Look at those men.

Carl: Look at that buffet.

And sure he was a good dad. Heck, he even played a sort of father figure to next door neighbor Steve Urkel.  In fact. he taught me that yelling was okay, and in fact, a necessary means to an end.

Urkel: I don’t have to take this! I’m going home!

Look at me when I’m talking to you! Let me tell you something, Will. I grew up on the streets just like you. I encountered bigotry you could not imagine. Now you have a nice poster of Malcolm X on your wall. I heard the brother speak. I read every word he wrote. Believe me, I KNOW where I come from! 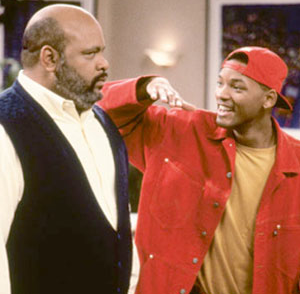 Good ol’ Uncle Phil. He was the dad with swag (only because he had the most money of all my dads. Living in a mansion in Bel Air?? That’s definition swaggy.) He was also a bit of a hard-ass… but, I guess you have to be when you’re a judge, right? Can’t mess with this guy (judge-duties aside, he’s rather large. You probably wouldn’t mess with him for that reason either.)

Ashley: Come on, Dad, 10 years? The Menendez brothers will be out before I am.

Uncle Phil: The Menendez brothers got home on time.

As for my lessons from Uncle Phil?  Well, aside from instilling a fear of large men,  he sorta taught me money management. Conversations about trust funds and bank accounts with Carlton…then again, he also taught me how sexism could work to my advantage as a girl (cc: Hilary Banks’ classic line “Daddy, I need 300 dollars”) and the importance of love over materialism.

Phil: Hilary, I think there’s something you need to ask yourself.

Hilary: Oh, I already did. I’m registering at Tiffany’s.

Hilary: Love? What’s love got to do with it? I’m having a wedding!

“To me, average was a dream. That’s why my father worked his butt off, so maybe his son could have something more. And I learned from him, Cory. And I respected him because he did the best that he could. And I was proud of him. And he would have been proud of me, too. I don’t know. Maybe if my son thinks average is nothing, then I’ve done my job. But I’m sorry that you’re not proud. Of him, me and of yourself.”

As if it wasn’t obvious from the aforementioned quote, Mr Matthews’ main teaching was work ethic. Heck, he proved no matter how “trivial” the job, if you worked hard, you’d be recognized (I mean, he won an ‘Outstanding Grocer’ award… proving that if you bag those items properly, you’ll bag a trophy, too.)

He, too, was a risk-taker. Remember when he impulsively quit his grocer job that he had since high school, without a backup plan?! (Perhaps that’s why Cory strayed and started talking to Lauren in that mountain/ski resort episode, where he eventually kissed another girl besides Topanga. Risks!) Heck, he encouraged us kids to be ambitious, dream, and reach for the stars.

Eric: What’s wrong with being comfortable? I mean, I think I could do very well settling in a place like this!

Alan: But that’s it, Eric! That’s all you’d be doing! Just settling! And over the years you’d try and convince yourself that that’s the life you really wanted, but you don’t, I mean, you just stumbled into it and-and you’ll never love it, and one day you’ll realize that all you’ve done is settle, and you’ll not like yourself for that.

On another note. He is also to blame for why I find myself attracted to younger guys…

Alan: [His daughter Morgan is going out on a date with a boy in the 8th grade] The 8th grade? What’s wrong with the boys in the 5th grade?

So there you have it. From enjoying food, to dreaming big and taking risks, my “fathers” have contributed to the woman I am today. Of course, there are other male figures who played a significant role in shaping how I view the world, so I must sign off with a few “honorable mentions.”

Mr. Belding, Saved by the Bell