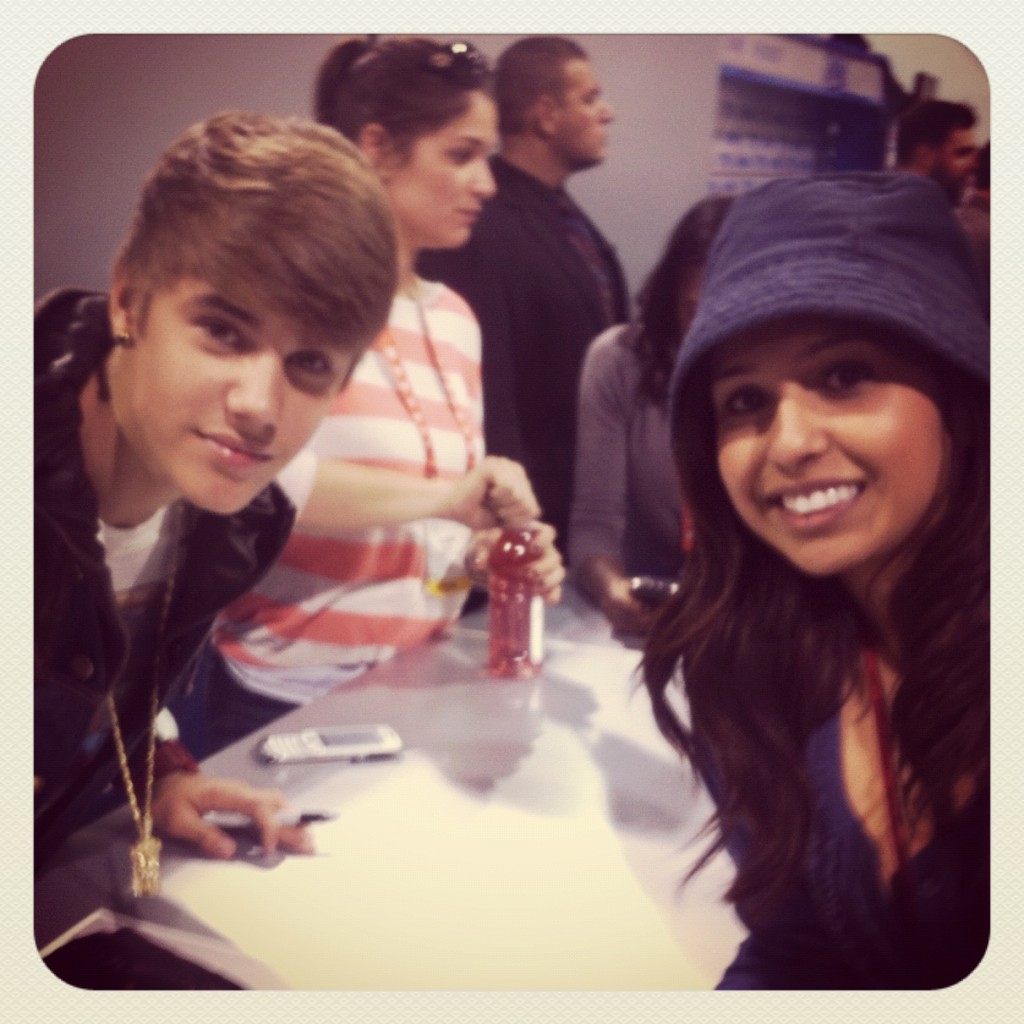 What does an Extra correspondent, Diddy’s son, and a tech trade show have in common? Um. They all helped contribute to one of my life goals…a conversation with Justin Bieber (maybe not a LIFE goal, but at least something that 13-year-old SK would think was really dope.)

The trade show? CES in Las Vegas. I was there to do coverage of all the latest gadgets and unveilings for the tech show I host for Sony called “SGNL.” I was done taping on Tuesday but I asked to stay til Weds because I jokingly told the network that I wanted to stalk Justin Bieber the next day during his appearance at the TOSY booth for some robot unveiling. OK maybe it wasn’t exactly a joke. And maybe it wasn’t stalking. Either way. I admitted that I was a sucker for the 17-year-old heartthrob,  and that I shouldn’t leave Vegas without trying to have a moment (Especially since the week before, unbeknownst to me, Biebs was at the Laugh Factory for an 8pm show, and I was two doors down at Coffee Bean hanging out with a friend, who’d be doing a spot on the 10pm Laugh Factory show that same evening. Needless to say, I held hanging out with said-friend against him because I felt he kept me from Bieber.)

PS I guess I forget how crazy regular America is when it comes to celebrities, because I went to the event 20 minutes early thinking I’d be fine. Wrong. Chaos. Tons of people. Yeah. Even at a tech trade show dominated by middle-aged men in suits, there were Beliebers. Or at least, parents of Beliebers who wanted photos with him to get validation and autographs to buy their children’s love.

Anyway I maneuver my way to the front of the side area crowd so I’m on the edge where the velvet rope was (because I’m a badass like that and make myself appear important so people move when I say I need to get through. Too bad this approach does not work when trying to cross security.) Security doesn’t care that I have a press badge. In fact… he stands in my way, blocks my view, is basically kind of a jerk.

As I stand there and wait, I see Scooter Braun. If you don’t know who that is, you’re not a real fan (and for you non-fans reading this that want to know, he’s the guy that discovered Bieber on YouTube years ago, and now acts as his manager.)

I ask Scooter if Justin is available for interviews. He says he’s not doing anyway. I ask if  he knows what Biebs’ favorite app is, and said that he definitely couldn’t answer that, as his name is attached to too many brands. Anyway. We chat more. He’s super nice, so I figure since I wasn’t gonna blog about Bieber, I could at least have a solid Scooter Braun story. Obviously, a blog requires a picture. So then I say “This may be a weird question, but then again, you probably get it all the time – can I take a picture with you?” He said it was definitely a weird question, laughed, and posed anyway. We chatted again later. He asked if we just walk around CES and are given free stuff. Not really. I told him Biebs could do that, but not me.I establish that I host a tech show for Sony and I could probably get Bieber Playstation stuff, before I realized he probably already gets all that stuff. Scooter reassured me that yes, indeed, Biebs gets a lot of swag. Observation of Scooter’s dopeness? Canadian lady nearby chats w scooter. Scooter brings her back a signed Bieber picture. This middle-aged woman eeeks over him. This is when I realized Scooter is the nicest person ever (maybe not EVER. But you know what I mean.) As an industry profesh working for someone as big as Bieber, you have the status to be a jerk, and he isn’t. This alone is reason for him to be my new temporary crush (Plus, I like guys who wear hoodies, don’t know why. Think it’s that whole Eminem appeal. Swag.)

Anyway. Since I had maneuvered my way to the front of the side area blocked off by a velvetrope, I was positioned in such a way that, even though I couldn’t really see too much, there were swarms of people behind me, thus making it impossible to exit. Keep in mind, I don’t wait. I don’t wait in lines ever. Call me spoiled, call me impatient, really… I just think I can spend my time in better ways. Plus, I’ve been fortunate to someone get access to things just through friendships and random connections (khannections? Ack. I try too hard to be clever.)

So here I am thinking, “Wow, yeah…13-year-old SK would have def waited through all of this for a Timberlake sighting, and here she is now… over a decade later…waiting for the OTHER (possibly more talented) Justin.

And as soon as I think that…the connections start working. A dear friend, Adrianna Costa, who is a correspondent for Extra, is there covering the event. She and her producer spot me and we hug/chat. Security now eases up because the people of Extra have essentially validated me (Vegas/LA = image. If you appear to know important people,  security folks become nicer) – and now security allows me to hop the rope and get into the VIP press/area.

As I’m standing there, I see a guy who I know. I’m like, wait…is it Quincy?! So I text my friend Deepa whose home I had met Quincy at the previous month, asking her if Quincy was friends with Bieber, and if he’s a skilled photographer (all I knew about him professionally, until this point, was that he’s a musician from a talented music family that includes Diddy. Yes, Diddy, of  White party fame.) She responds with yes. So now that I’ve gotten access over the rope, I approach Quincy, give him a hug, remind him that I’m the reason he had such a delicious dessert at Deepa’s housewarming/holiday party, and that he owes me Bieber (okay I didn’t say it with that much sass at all, it just sounds better that way. Really. I was happy and friendly, excited to see Quincy, and asked if I could meet Biebs.)

So… Quincy introduces me to Bieber.  We shake hands with our right hand. He’s as adorable in person as he is on tv/tshirts/internet/magazines/everything-else-with-his-face-on-it. He asks how I know Quincy. We explain the connection. As Bieber is signing a photo for me,  I observe that he’s left-handed. Of course, I’m left handed, so I tell him this. I then tell him something to the effect of “You’re left handed, it means you’re a creative genius.” Which I then follow up with “wait… you probably already knew that.” He laughs. His publicist laughs. He then asks me, “Wait, are you saying you’re a creative genius?” Of course, I say yes (I mean really, have you seen my blog/twitter/hung out with me? Brilliance.) He laughs. I respond by telling him you have to have confidence. Publicist gives me props for it, saying she likes it. I nod, start talking about how we’re in the exclusive 11% of the world and something else that leads me to use the word “swag”… and then…I leave.

So yeah. The lesson of the story is…whatever your goals in life are, whether it be to take over the world, be incredibly successful, meet your life partner, or um, meet a 17-year-old popstar who you are pretend obsessed with, as long as you know what you want, you can make it happen. As Bieber’s 3D docu-movie’s title suggests, Never Say Never.