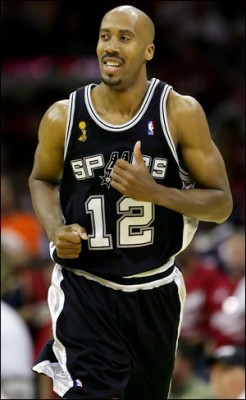 What happens when you @mention a former NBA player on Twitter, who just so happens to have gone to your high school?

You end up becoming Twitter friends and getting dinner the next time he’s in town.

The common link? Fresno’s Edison High School (where I just so happened to unintentionally end up being in a position to organize my high school reunions the rest of my life. No one told me that was part of the whole being “Senior Class President” role.)

Anyway. We became Twitter friends back in April, had many a conversation about Fresno and the broadcast industry (Bowen is an NBA analyst for ESPN), and that was that. We followed eachother, so indirectly, it’s sorta like we were talking everyday (thank you Twitter for giving me a false sense of friendship with those I follow.)

Fast -forward to August, I post my new hosting demo reel online (which if you haven’t seen, you should go WATCH now), and he gives me a solid shout-out: 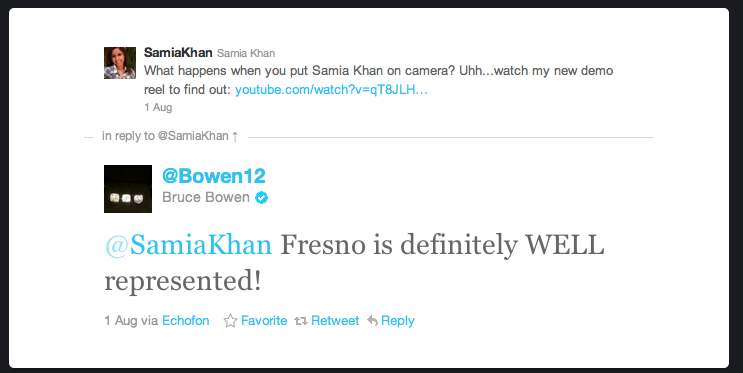 Thus, conversation strikes up once again, and it’s decided that we’ll grab a meal when he’s in LA mid-August. We hit the JW Marriott at LA Live (because I figure basketball players love to hang out near Staples Center, home of the Lakers/Clippers?) and dine there. Conversation highlights?

Anyway, aside from bullet point-worthy conversation, we also talk about our careers in the broadcast industry, and where we’d like to go (gasp! We talked about real issues?!) But that stuff isn’t fun to blog about, so I’ll end this now. But speaking of my career… if you didn’t happen to click on the “WATCH” link above when I suggested it, feel free to watch my demo reel below… (yes, I understand this is a shameless plug.)