What happens when you take a Grey-Goosed-out comedian friend (let’s call him FI, short for Funny Indian) to one of the hottest spots in Hollywood?

Um. You befriend a Disney star whose song you secretly love (and not-so-secretly blast everytime it plays on Satellite Radio.)

The Grey-Goosed-out friend? Rajiv Satyal (or as I call him, FI.)

The Disney star? Demi Lovato (her nickname is DL. No, not on the “down low” – her initials are actually DL. Though if you think about it, it’s kinda ironic that she’s DL…given that she has over 4million Twitter followers. Nothing DL about that.)

The location? Lexington Social House (or Lexington for short. Maybe I’ll get lazy and just refer to it from here on out as “Lex”… however that conjures up images of Superman’s arch-nemesis Lex Luther, and well, he was just evil.)

So here’s the deal. FI and I had a plan to hang out on Saturday night. We end up going to Lex to see some dear friends (Fahad, Tova, Christine, congrats on your KHANversations shout-out). We have a table. Having a table with bottle service can only lead to one thing – nonsense. And by nonsense I mean, a once sober Funny Indian eventually becomes a crazy, wild, super dancer Funny Indian.

Now, if you’re anywhere near viewing distance of this character known as the “Funny Indian”, you’re getting a firsthand account as to why he lives up to the “funny” in his moniker. He’s wilin’ out. Needless to say, the girls on the table next to us take notice. I begin talking to them across tables, as I notice that they are amused by my friend. I tell them I’ll send him over (at this point, Tova had pointed out that this nearby table was also home to Demi Lovato.) Anyway, I motion FI to go to that table, and he straight DISSES them – saying something to the effect of “No, they can come here.” So I tell the girls that he doesn’t want to come over… and what happens next? They egg the girl-whose-supposedly-DL on, and next thing you know, she’s gotten up from her table, walked over to ours, and started dancing behind FI! It’s a spectacle. I join in (mostly for blog post purposes.) My friend Tova attempts to take a picture, but Demi’s got a good  iPhone/fear-of-Twitpic radar, and immediately jolts back to her table before Tova can snap away.

Alas. I thought the blog post had ended there… an exciting dance sesh with Demi Lovato, one that involved FI dissing her, and she throwing herself at him (in the platonic, I just want to do something funny sort of way. Not sexual.)

Minutes later, FI goes to DL’s table. He offers them our table and the large bottle of Grey Goose that our friends had left there, convincing them to go drink it. DL’s response? “I don’t drink!”

And… this is my cue to bond with her. Because as any friend of SK who has hit the LA nightlife with her knows, I don’t drink, but I can seriously down a can of sugarfree Red Bull or two. DL’s drink choice? SugarFree Red Bull. So I discuss the benefits of not drinking with her, why having multiple cans of SFRB is better (basically you can have fun and still drive), how SugarFree is far superior to regular (who wants to drink 110 calories when you can just drink 10?), and how I support her cause (I make no mention of recent tabloid headlines involving her.)

FI continues to suggest she drink (unbeknownst to him, she’s 19…) but he does not succeed. Before convo wraps, he tells her “You are SO nice! I just want to tell you that. It’s so rare to meet someone in Hollywood that’s just…nice.” (DL has been smiling the whole night.)

DL’s response? “Well, you are so fun. It’s so rare to meet someone who likes to just have fun.”

So DL is nice, FI is fun, and SK is just amused by this whole scenario that she knows is unfolding into a future blog post (yes, the one you’re reading right now.)

And well…let’s be real. Normally, I write blog posts for friends and followers. Today? I write the blog post as a reminder for FI as to what happened that night… because well, he can’t remember.

PS This isn’t the first time FI had a fab A-list encounter when he and I hung out – read about our run-in with Eva Longoria and Tony Parker, and how we all became BFFs here.

PPS Even though we didn’t get a photo with Demi, I did catch her song playing on SiriusXM the very next day. Naturally, I got excited and took a photo and sent to FI. In case you care what that photo looks like… 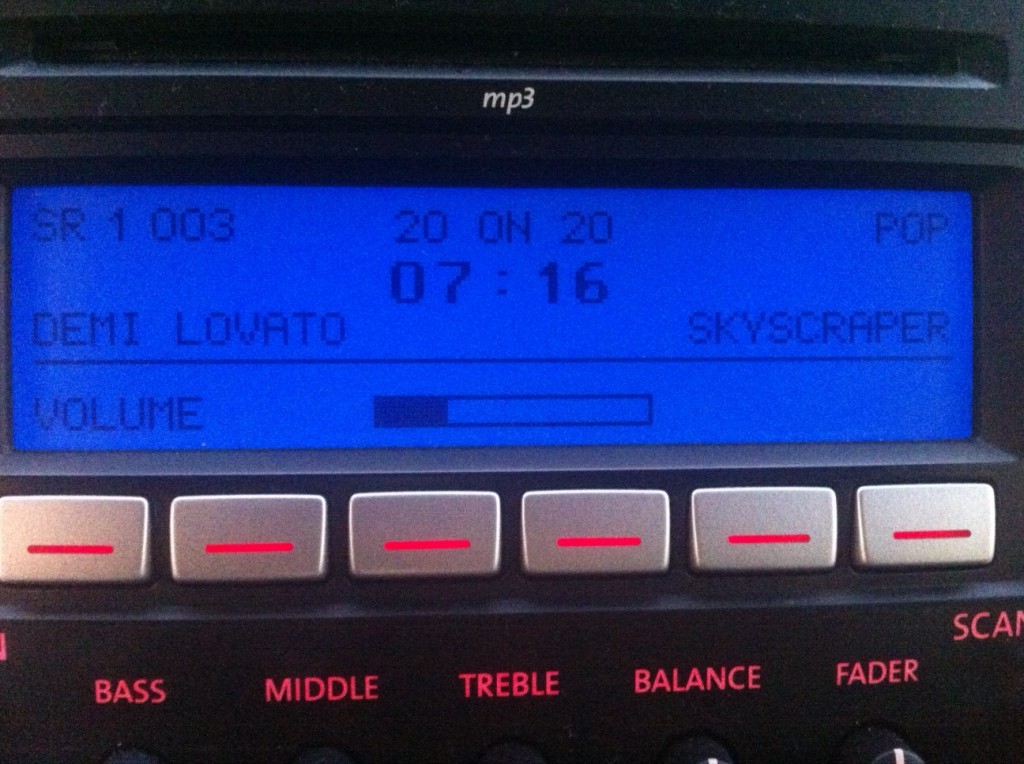