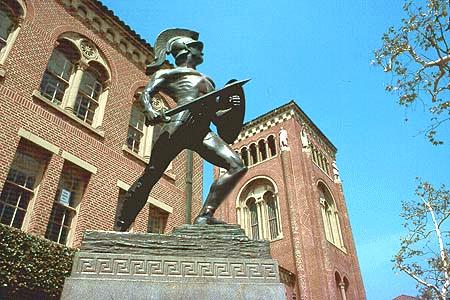 Okay so I have a confession… I used to WANT to be a Bruin. Yep, I spent my whole life telling people I was going to UCLA, only to choose (yes, I got into both USC and UCLA) it’s rival school.

And, because of the “Breaking News” all over my Twitter and Facebook feed yesterday that USC was once again ranked higher than UCLA by US News and World Report, I thought it was time I share a little something from 2003.

Specifically, a BLOG entry from April 2nd, 2003 (yes, I even blogged then) capturing my internal debate that would shape my life forever… Where to go to college? The blog is below – with 2011 Samia commenting in pink.

USC or UCLA? A trojan or a bruin? Ghetto or high class? (Yeah, I referred to USC as ghetto, and UCLA as high class. The ignorant girl from Fresno in me had no idea that USC was filled with imported cars, international royalty, and more… I was going based off neighborhood stereotypes.) Private or Public? Red and Gold or Blue and Gold? (Because we should all pick our University based on colors…and yes, I considered applying to UNC Chapel Hill for their baby blue colors.) AHHH…What a dumb hard decision. OK, well, as you can tell, I can’t make a decision as to what college I should go to. Let’s look at the pro’s and con’s of each.

USC: Excellent Annenburg Communications School (180 in my class means more attention and opportunities for me) (I’m an attention whore), great internships which lead to contacts and future job possibilities (ha, my internships didn’t really lead to possibilities, my USC friends/networking did), school allows me to do broadcast journalism, international relations, AND pre-law (all at once) (I dropped the idea of IR and pre-law, seemed like an unnecessary amount of reading), I’m a Presidential Scholar (thank God for high SAT scores paying for my schooling), bad part of town (‘bad’ based on media reports of crime and media portrayal of area, sorry South LA for being a judgmental jerk as a kid), ranked 30th in the nation (Annenberg is like #1 though on this side of the mississippi for communications) (what’s that? We’re 23rd now?), lots of housing

UCLA: amazingly pretty campus (this only applies to the campus, USC has prettier people and yes I’m biased when I say that), wanted to go there since I was 5 (would you listen to your 5-year-old self?), #2 public school in the nation (#25 overall) (who ever remembers second place?), lots of people, nice college town (westwood’s hecka fun) (I used to say “hecka” like every other sentence), um…they have a Tommy Girl Fragrance display…basically, there’s ALOT on campus so I never really have to leave (yes, I thought the fact that the bookstore selling the perfume 17-year-old me wore was reason to go to it. Have I ever mentioned how I would totally NOT be friends with the 17-year-old version of me?)

OK, so I can’t figure this one out. Some people say that I should go with the school that costs less…But eh, that really doesn’t matter, since USC will probably only cost me about $500 more a year. Ugh, I’m sure I’ll be updating with more conflicted entries, so I’ll just end this one.

Kind of a silly debate, right? If only someone told me “you’d meet amazingly cool people who would shape and influence the rest of your life and indirectly open up great opportunities, you’d host a gameshow and report on actual news in LA – broadcast to millions, and learn by doing, not just reading” – I could have at least saved myself from an embarassing blog post.

PS in case you needed another reason why USC > UCLA… see photo below: