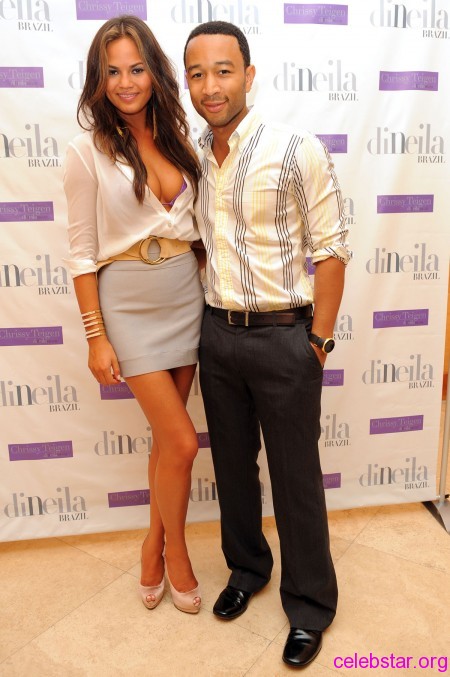 “Hi…um, I follow you on Twitter, so it’s totally acceptable that I followed you into the bathroom, right?”

The aforementioned quote? ALMOST actually stated, as a “pickup” line (on a girl, mind you)…

So here’s the deal. I’m at the Hollywood Improv to check out a few friends (Jonny Loquasto and Grant Cotter) who are doing a show with the (former) cast of NBC’s Free Agents (If you didn’t understand the previous parenthetical clause, it’s because the show has since been canceled) – and as I stand on the wall, I just so happen to spot John Legend.

Yes, his girlfriend. Now you may automatically assume that I was looking to see whether his GF would be there to find out whether or not I’d be in the clear to approach him and hit on him….

But no, that is NOT the case. In reality, I actually care more about his girlfriend being there, than the Legend himself.

His girlfriend, you could say, is a Twitter legend (yes, I’m trying to be punny.)

If you don’t know her, her name is Chrissy Teigen. Supermodel. Super blogger. And super awesome and sarcastic and hilarious on Twitter (yes, I’ve publicly stated that I digitally aspire to be her.)

Anyway. She was there. I immediately start tweeting incessantly about my spotting, and my friend Josh Sandoval encourages me to go say hi.

However, I refuse, mostly because it’d be a little awkward to walk through a comedy club and approach a table in the middle room as stand-up comedy is being performed on stage, especially since I wasn’t a server checking to see if they were meeting the 2-drink minimum.

So I just watched the show…. UNTIL… I see her get up. Which can only mean one thing – she’s going to the bathroom.

Once again, my friend Josh encourages me to go strike up convo. He actually is the one that came up with the line I started the blog post with (yes, the “Hey I follow you on Twitter so it’s not awkward that I followed you into the bathroom in real life, right?” line.)

Anyway. I decide I have to go to the bathroom. Mostly because I never want to let moments pass. This one time I was at the Cheesecake Factory, the day the Michael Jackson death/Conrad Murray trial started, and Jermaine Jackson was there. I stood there, contemplated for minutes as to whether I would say something, and by the time I wanted to, it was too late – he left (clearly, making decisions is not as easy as 1,2, 3.)

So I go into the bathroom and attempt to do my hair (yes, I randomly had a bottle of Alterna hair spray) so as to not look threatening. Chrissy comes out of the stall. She washes her hands. I glance over, and instead of using the cheesy canned line, I just say something to the effect of “Hi. Um, I follow you on Twitter, and I just think you’re awesome.”

She smiles, laughs, says she’s not mean in real life. I told her that I support her style, and that I prefer her meanness and sarcasm to her serious tweets that she randomly throws out (we then talk about a recent death penalty rant she went on.)

Since we’re at a comedy show, and since she’s funny, I ask her if she’d ever do standup. She says that she wouldn’t, that it takes balls to do standup (probably why there are more male comedians since they have physically have said-balls), and then next thing you know I’m confiding all my life’s relationship problems to her in the bathroom (something to the effect of the emotional destruction that unexpectedly running into your ex has on your day.)

I also mention that a dear friendager (yes, that’s friend and manager combined), Ray Hughes, also told me to say hi to her and tell her that I enjoy their Twitter exchanges. She knows him, and recalls the moment they were stuck on a plane together.

Anyway. We talk about Twitter a little more, she tells me she’s afraid to take her phone out (yeah, the Hollywood Improv gets mad about phones being out. Something to do with respecting comedians or something) and then we part ways. I continue to do my hair so it looked like I had a purpose in the bathroom, and she leaves.

Now many of you may be asking, “Why didn’t you take a picture?” Well um, I thought bathroom stalking was bad enough, I didn’t want to come off as a total creeper. And hey, if a picture is worth a thousand words… will writing 1001 make up for not having a photo? (Too cheesy? Sorry. I needed to think of a way to wrap up this post. The end.)