It’s been a rough weekend for myself and many other 20-something women. And no guys, it has nothing to do with PMS.  It has to with…this: 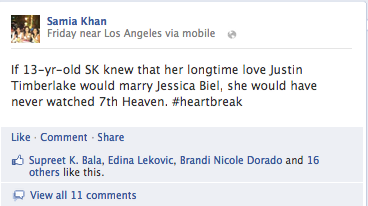 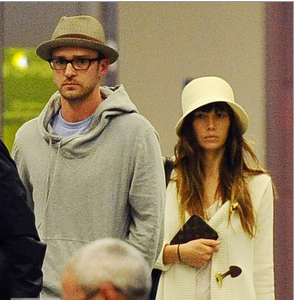 Yes. So many hearts broken, so many dreams shattered.

But, as an optimist always believes, there’s an upside to every moment of sadness. In this case? An inspiration for a blog post…a letter to my 13-year-old self (and to the inner 13-year-old within all my female readers), because well, real talk? We all did silly things when we were teenagers.

Justin Timberlake will one day get married. And no, it won’t be to you. So save your prayers and use that effort towards something more beneficial, like asking God not to let you fall for guys who will promise you the world and inevitably break your heart.

Speaking of boy bands, you’re on the winning team. *NSYNC, will indeed, be the better choice over BSB.

There’s more to life than TRL. I know, it’s shocking. But one day, MTV will become irrelevant, and it will no longer play the “M” in MTV. Be prepared to care about random drunk “guidos” living in New Jersey who get famous for hitting the gym, getting tan, and doing laundry.

Stop saying that things are “the bomb”  (it’s not a hip term, and on top of that…you’re brown. In a few years, you’ll never be able to use that word again anyway.)

Do NOT invest in that Sisqo album.

Speaking of “investments,” you really don’t need to collect all those Beanie Babies…unless you want small, stuffed creatures collecting dust under your bed in 10 years.

There will one day be a phenomenon known as “MySpace” – don’t give in.

Bet someone that, of the Stevens children on Disney’s “Even Stevens”, Luis will end up more successful than Ren.

Invest in your real friends. SmarterChild won’t have the answers to all your life’s troubles.

Don’t bother saving all those “100 free hours of AOL” CDs that get mailed to you. Unless you plan on being a hipster in 10 years and need a gimmicky, retro idea for a coaster.

In late-2003, find a guy named Mark Zuckerberg who attends Harvard. Friend him in real life, drop out of school, and go work with him on some tech thing he’s starting up.

And lastly, don’t be fooled by Lance Bass’ relationship with Topanga. It’s all a lie.