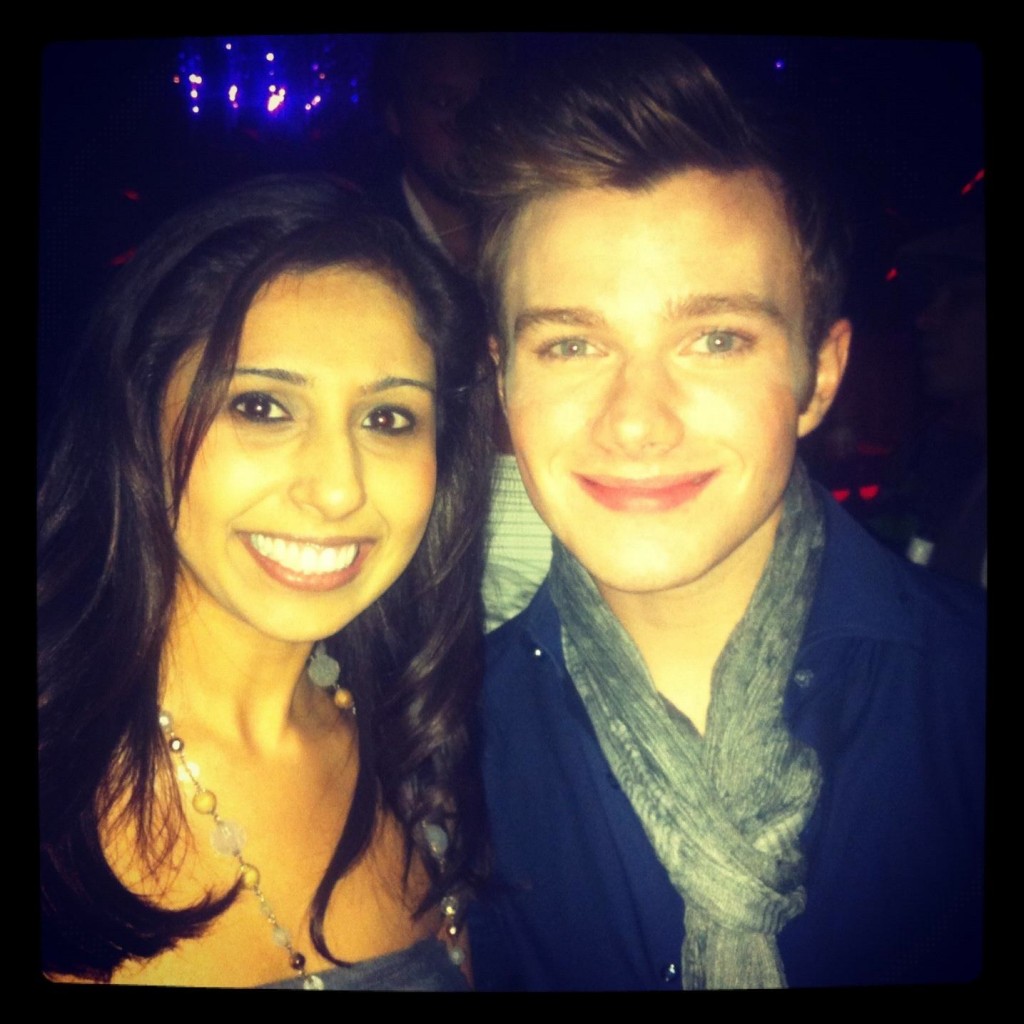 This is the story about the meeting of two people who live in Los Angeles, yet, whose parents still live in Clovis, CA.

One of these two just so happens to be a critically-acclaimed actor on FOX’s hit show, Glee.

Here’s the thing. I’m not a Gleek (translation: Glee geek.) I’ve watched the show once, and I totally understand where the hype comes from. Great show, I’m just not tuning in every week.

So when my friend and former Vox agent Puneet introduced me to a client, Ashley Fink, at my agency’s mixer at Bootsy Bellows in West Hollywood, I had no idea she was a former actress on Glee. I knew she was “talent” (like myself), but…I left it at that.

Her “plus-one” at the party? Chris Colfer…who she introduced to Puneet and I as just “Chris.” I, of course, immediately started…talking (it’s what I do for a living.)

You see, my desire to talk to Chris had nothing to do with the fact that he has won an Emmy, or that he stars on one of the biggest shows on network primetime television, or the fact that he was one of TIME Magazine’s most influential people of 2011.

Instead…it had to do with the fact that he was someone, living in LA, who was originally from…Fresno (the suburb of Clovis, actually, to be specific.)

And as a proud Cen-Cal native, I can’t help but know of the celebrities that come out of my hometown (Chris Colfer really put us on the map, before that…well, we had KFed.)

You see, people from Fresno rarely meet others from said-hometown. So when we do, we end up talking…a lot. In fact, Chris said that in the four years he’s lived in LA, he “could count on his hand” the number of people he’s met from the 559. Needless to say, we had an instant bond…meaning, after an hour of conversation, we had touched upon everything from restaurants and grocery stores to mutual friends, with some heart-to-heart “real talk” moments sprinkled in. So here’s the recap, for all you 559-ers and Gleeks that care.

It turns out, both Chris and I frequented the same intersection of streets during our teenage years…Herndon and Fowler, in Clovis. It may sound weird, but it appeared that we both derived some sort of pleasure in the fact that we went to the exact same grocery store (Vons), gym (GB3), pizza place (Pizza Hut), ice cream joint (Coldstone), coffee shop (Starbucks), unhealthy but delicious Chinese fast food (Panda Express), and the best Mexican place in town (Bobby Salazars). Needless to say, all that talk about food made sense…given that as conversation progressed, we ended up talking about our “fat kid” days.

Yes. I shared with Chris a “fun fact” that most of my close friends don’t even know…when I was 12-13, I was maybe 30-35 lbs heavier than I am now…more than a decade later. For some reason (maybe it was the Red Bull in me), I started telling Chris intimate details about my life… like the time a guy, who shall remain unnamed (mostly because he’s a close friend now) wrote in OTHER kids’ yearbooks, the following line: “Samia is a fat cow.” There was another kid that gave me the title of “Burger Queen”, and while hurtful, in retrospect, was kinda clever for 7th grade. As for Chris, he was 50 lbs heavier in his earlyteen years, which baffles me, as he’s so trim and fit, and yeah… he attributes his weight loss to spending two hours a day at GB3 (dear George Brown, feel free to use that fun fact in the marketing of your sports clubs.)

I told Chris about my first gig when I was 11, on ABC30’s local kids educational show, “The Idea Factory”, and how I don’t ever want those tapes to surface because of how large and unstylish I was (denim vest, eww.)  Needless to say, the mention of ABC30 (the valley’s leading news station) caught Chris’ attention, as he gushed about how much he loved watching anchors like Warren Armstrong and Nancy Osbourne, and how memorable Graciela Moreno is because of the way she says her name in the most authentic of Mexican Spanish accents, and then reads the rest of the newscast like a white person.

Anyway. We continue with the “let’s talk more about our favorite things in Fresno” conversation.

We talk about how “Fresno” it is to hang out in parking lots in high school, and reminisce about our own respective Taco Bell parking lots of choice (I frequented Herndon and Marks, his was on Shaw and like Armstrong.)

We talk about the famous Clovis Rodeo. He asked me if I ever went “mutton busting”… um, I had no idea what it was (clearly, I have less Clovis-cred than Chris.) He explains: little kids riding on top of sheep. * Gasp * I was shocked and intrigued. This later led to conversation about Sheri Lewis and lambchop and “the song that never ends.”

He brings up Roger Rocka’s and Junior Company, a dinner theatre show in Fresno’s Tower District. I told him my family friend Zara was in that. And next thing you know…he remembered Zara, and her mom (who is like an aunt to me), got super excited, and emphasized that I should say hi to them for him (PS Chris…they say “hi” back.)

We talk about RiverPark. For those of you who have never been to Fresno, it is not a river…and it is not a park. It is a giant shopping center with an Edwards movie theater and every chain restaurant to ever exist. We talk about Fresno’s love for chain restaurants, I tell him that a YardHouse opened up there and it’s like the “it” place with sometimes a 2-hour wait, and we touch upon our favorite places in Riverpark….including Dai Bai Dang, an Asian restaurant I used to hostess at. Who knows, I could have seated him and his family six years ago? (Hopefully I gave him a decent table.) I also inform him that the Italian restaurant Fuzio’s had turned into a Subway. Over the course of an hour I sometimes felt like I was some ambassador from Fresno, sent to Chris to keep him posted on the happenings of his hometown (I go home 1-2 times a month. Chris? Just once a year.)

We also touch on other famous Fresnans…basketball players that win championships but are also accused of rape (DeShawn Stevenson), Disney stars (Beans from “Even Stevens”), and Hollywood’s most successful baby daddy (K-Fed).

In the end, I thank him for making Fresno/Clovis proud for a legit reason…take a picture with him to capture the “559” moment for Instagram… and part ways. Who knows? Maybe this will be a-once-in-a-lifetime hangout, or maybe we’ll end up hanging out every Christmas at a Clovis intersection near home.