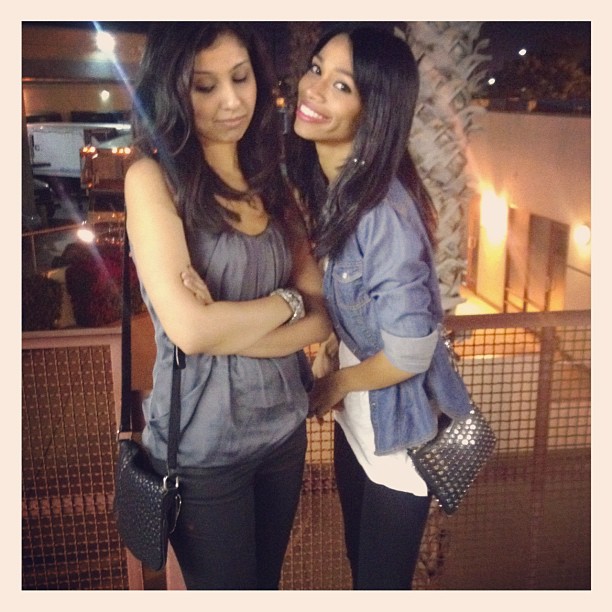 Q. What happens when Samia Khan tags along with her friend Jessica Berry to a comedy show at the J-Spot in Inglewood?

A. Samia realizes she has less street cred than she thought (i.e.: They’re playing a rap song, she goes “Why aren’t they playing 2 Chainz?!” and her friend points out …“Samia, this IS 2 Chainz.”)

B. Samia finds herself in a room of people who are talking more frequently during a show than she does

C. Samia realizes her black female friends are “posers” because they don’t talk the way Billy Sorrells makes them out to be in his “Shit Black Girls Say” video.

E. All of the Above

In case you couldn’t guess, the answer is E…all of the above. However for those of you who were convinced that A couldn’t have happened because SK just has so much street cred and swag, I’m sorry I’ve disappointed you (but thanks for your confidence. Khanfidence. Ack. Yes. Had to go there.)

Anyway. In case you couldn’t tell by the quiz, the comedy show I was at in Inglewood happened to be “black comedy”… it’s a brand/style of comedy – jokes by black people, FOR black people (kinda like that FUBU “For Us, By Us” saying.) There’s a different between “black comedy” and comics who are black. The latter I had seen all the time around town at various shows. The former, well, I had never experienced. So when Jess suggested we go to this black comedy show featuring headliner Billy Sorrells, I figured…why not (I thoroughly enjoyed “Think Like a Man”, surely I would understand the humor, right?!)

Little did I know.

It’s interesting to be a minority in a crowd full of minorities. Because when the minority becomes the majority, well, you really get an insiders perspective.

From Derrick Keener to Donte Barrett to Nnete to Billy himself, there were many jokes about baby mamas and rap music and black girl sayings (apparently they said “what?!” in every sentence), lots of use of the word that starts with “N” that I can’t say, basically…each comic hit on clichés that, if someone white made, you’d be upset/offended by, but because they were made by one of their own, it’s instead embraced. (Example: I’m of South Asian descent. So I’m ALLOWED to make jokes ranging in reference from 9/11 to 7-Eleven… curry, taxi, call center, arranged marriage, hard-names-to-pronounce, being cheap… you name the cliché, and I’m technically allowed to go there. Not that I want to go there. But at least I CAN. And well, if a white guy goes there, you can be certain there’s some activist type that will cause an uproar because they’re offended on behalf of brown people, in turn causing an unnecessary amount of media attention on a situation that wasn’t even that racist to begin with.)

Anyway. The show ends, and as I’m ready to bounce…someone catches my eye. Someone else who apparently attended the show.

It’s Eddie…effing…Winslow! (Or as he was known before the late 80’s/early 90’s hit show “Family Matters” came out, Darius McCrary.)

If you don’t already know, I’m 90’s obsessed. There’s something special about childhood nostalgia that will always be near and dear to my heart.

Anyway. Billy introduces me and Jess to him – simply, “this is Darius.” And well, instead of playing my usual, cool, non-chalant, I-don’t-give-a-F*** approach that I generally have with “celebrities”, I opt for honesty.

“I KNOW who you are, I watched you every afternoon of my childhood.”

He laughs, he smiles, he hugs me, he makes some comment about how I dated him (ie made him feel old, not dated him as we went out on a romantic evening or anything), and thanks me for watching.  Then Jessica, playing the role of my personal hype-man, goes on and on about how great and wonderful I am on Twitter and how I’m apparently funny on there, and then we all talk Twitter – prompting Eddie (Darius) to share the highlight of his Twitter day with us…

BEING FOLLOWED BY PAM GRIER!

Except. I didn’t know who he was talking about…

…alas, I lost cool points in front of Eddie/Darius.

Seeing that I failed when it came to truly bonding due to our cultural/age gap, I walked away defeated, only later realizing I should have promoted my blog to him and told him that I actually referenced his 90’s character back in June in my “Daddy Issues: What My TV Fathers Taught Me” blog post! I also should have asked him to the 90’s party that I was invited to the next day, because well, who needs to dress up like  a 90’s star when you have a real life one as arm candy?

Thinking back, I now recall a saying that was used in Family Matters for one episode. Think it was a campaign slogan…“Win with Winslow.”