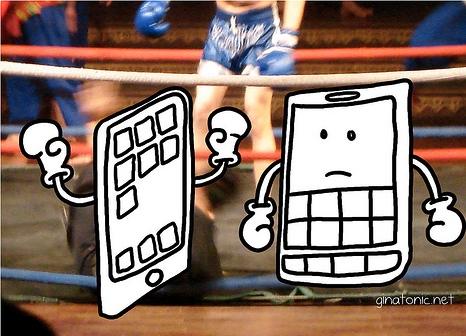 I said it once, I’ll say it again…

I would never date a Blackberry.

For those not following along, my definition of a Blackberry, as it pertains to this blog post, is a person who uses the RIM device, most often associated with finance and entertainment professionals. NOT the fruit…I rather enjoy the fruit actually…

Anyway. Being a Blackberry was cool in the mid-2000’s, pre-iPhone, pre-android. They were most often associated with “success” – mostly because “important” people needed to be available via email at an instant’s notice, and thus had to use said-devices.

However, there’s absolutely no appeal in the modern day era of 2011. Yes, I know the one argument all you Berries have – “But we have BBM (BlackBerry Messenger) – I can talk to anyone in the world!”

NEWSFLASH: There are Messenger apps (What’s App, for example) that allow you to do practically the same thing on iPhone/Android-based phones. Plus, the iPhone 5…which should be out relatively soon…comes with the BBM-equivalent iMessenger.

Thus, your ONE argument for the device fails. Anyway. You know how there’s that whole concept about how pets are a reflection of their owners?  I think the same applies to cell phones. See below:

So there you have it. A completely (un)scientific guide to the difference between iPhone/Android users and “Blackberries” – I hope that after reading this, I get at least one Blackberry to feel insecure enough to turn in their phones, leave the 2000’s behind, and join us forward-thinking people of 2011.