“DJ Reflex is one of the most influential players in the LA music scene as a tastemaker DJ, producer and entertainment entrepreneur. Credited for breaking acts from Kanye West, Lady Gaga to John Legend, he has made a name for himself not only as an accomplished celebrity DJ, but as a businessman with an undeniable ear for talent.”

So uhh…what happens when you approach a celebrity DJ with a video camera? A 3-minute video filled with discussions on tanning, Twitter, and a lesson on how to spin…(If only TMZ were this noble)…WATCH BELOW:

Check out that chemistry! (I always knew I had the potential to be a hip-hop DJ’s on-air sidekick/sidechick…)

Anyway, if you couldn’t follow along as to how this conversation started…

I was basically doing a behind-the-scenes video at the Sony store in Century City, got distracted by the music, and thus had to compliment the guy responsible…DJ Reflex (known to his mother as “Anthony.”) While in conversation (no, not all our conversation was documented by my little camera), I learned the following:

After the interaction, I decided to Google Mr. Reflex, landed on his Power 106 bio (in case you DIDNT watch the video like I asked you to earlier, DJ Reflex is most known for his gig on LA’s favorite hip-hop station), and discovered we have a lot in common…facts I could have totally used had I known we were going to converse. 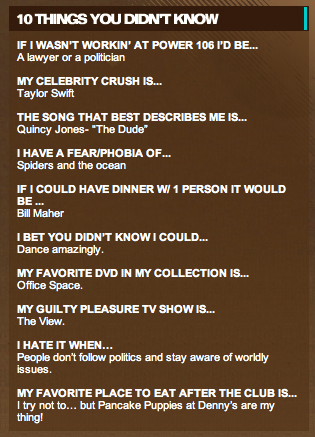 Seriously?! Guilty pleasure is The View (only my dream job.) Celebrity crush on Taylor Swift (mine too. Non-sexually, of course.) Enjoys the pancake puppies at Denny’s (I’ve had them, they’re amazing.) We were meant to be BFFs. Or at least co-DJs… Or maybe just DJ and interviewer. Still, we were meant to meet.

Like I said earlier…I’d make a great hip-hop DJ sidekick/sidechick…so um, Reflex…Anthony…call me when you want to talk cupcakes and Fresno on the radio.